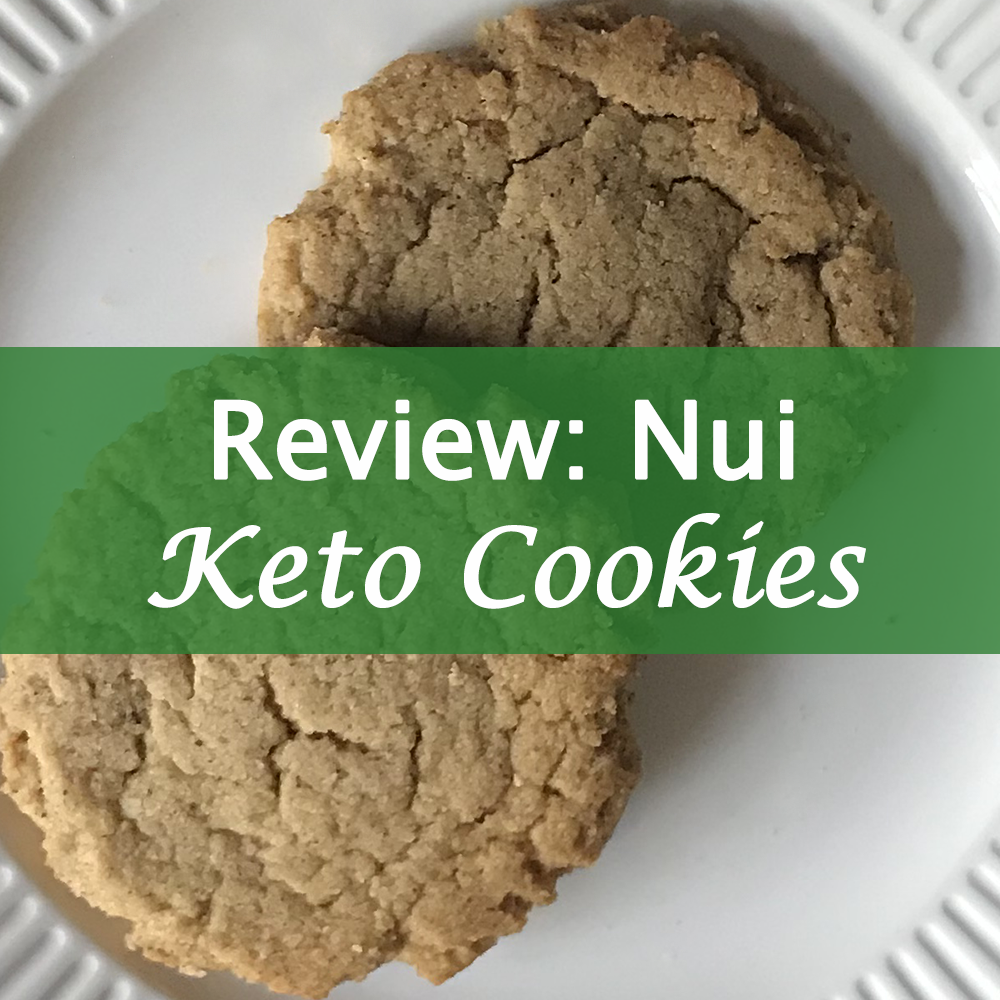 Update 11/2/2019: I updated this review when Nui appeared on Shark Tank, and now I have more news! As of recently, Nui has changed their recipe, so my review below is outdated. The cookies I wrote about are no longer available. Check out my review of the new Nui cookies to learn how the company changed them and which flavor was my favorite!

Update 12/2/2018: The keto-friendly cookie brand Nui appeared on an episode of Shark Tank that aired Sunday, November 25, 2018. I love Shark Tank and have reviewed other keto-friendly products that I discovered on the show show such as Wink Frozen Desserts and ENERGYbits spirulina. I was introduced to Nui when they were mentioned in Joe Rogan Experience #994, but they will now be known by a way larger audience as those keto cookies from Shark Tank.

Nui Cookies accepted $300,000 from Alex Rodriguez for 25% of the company. I hope that Nui’s success grows (and I’m sure the exposure alone will help a lot) because as you will see from my review (originally posted 4/15/18), the cookies are very tasty and have perfect macros for the keto diet!

When I first tried Nui cookies, the company was known as Keto Kookie, but they changed their name in May 2018 to appeal to a wider market than just the keto community. These low carb high fat cookies come in four flavors, which are:

Nui cookies are recommended by ketone researcher Dom D’Agostino, and many keto dieters swear by them. Keep on reading to learn more about Nui cookies including the nutrition facts, what Dom D’Agostino and Joe Rogan say about them, what I thought of them, and how you can buy them.

I learned about Nui cookies (then called Keto Kookies) from JRE #994 with Dom D’Agostino. Dom discussed a number of keto products in that episode including Wild Planet sardines and ENERGYbits spirulina algae tablets, which I’ve also reviewed.

Dom brought the cookies for Joe to try and explained that he vets out what impacts his blood glucose and ketone levels. He’s usually skeptical when people send him products, but he loves these cookies and considers them keto-safe. In fact, while these cookies sweetened with erythritol and monk fruit are advertised as having a low glycemic index, Dom says they basically have no glycemic index for him. He describes how he ate six of the cookies (three packets) in one sitting and didn’t have a glycemic response. For him, these cookies are a keto comfort food. Plus, he likes that they are substantial and contain a lot of fat. You can find more information about the ingredients on the Nui website.

“Yeah, it’s great, no, no, don’t get me wrong,” says Joe. “I’m not saying it’s a mirage like they’re bullshit. I’m saying, like, um, it’s a very strange texture to them, ’cause obviously there’s no grain, and there’s something about eating them and chewing them where your body goes, ‘Hey, uh, what, did you fuckin’ lie to us? Where’s the cookie, bro?’ Like it tastes good but there’s something about chewing it and eating it, it’s like, it vanishes.”

Now, this was my introduction to hearing that keto cookies exist at all, and while I was still eager to try them because I like unique foods, Joe’s comments did set me up for the expectation that keto cookies would be significantly different from regular cookies. Then I tried KNOW cookies and Fat Snax and now Nui, and I was very pleasantly surprised. I don’t think the texture created by almond flour is radically different than that of an traditional cookie. The taste and texture tends to be different, yes, but just not as different as Joe made it out to be.

When I bit into my first Nui cookie, I immediately noticed how sweet it was. For me, this is definitely a positive. However, if you are used to eating keto treats, you may not be accustomed to such an intense level of sweetness. The only other LCHF product I’ve tried that rivals the sweetness of Nui would be Keto Bars. The flavor of the chocolate is also very rich, which I enjoy.

Are these cookies like a mirage? I’ve tried to understand exactly what Joe Rogan meant. I kind of get it, but not really. The cookies do dissolve in your mouth, leaving behind a taste of extreme sweetness, but at no point is my body asking, “Where’s the cookie, bro?” However, when Nui appeared on Shark Tank, one of the Sharks actually made a similar comment to Joe’s, so I’ll have to watch the episode again. Maybe he was onto something.

For my second box of Nui cookies, I decided to try Cinnamon Snickerdoodle. A lot of keto treats I’ve tried or baked myself are either chocolate or contain chocolate chips, so I was excited by the prospect of mixing it up a bit. The macros for the the Cinnamon Snickerdoodle Nui cookie are slightly different than those for the double chocolate. I was delighted to see that the carbs were lower with only 1g net carbs per two cookies.

Aside from the low net carb count, the taste of these cookies is scrumptious. The texture may be slightly softer than that of the Double Chocolate Nui cookies. Certainly, the cinnamon flavor stands out, and second to that, I notice the taste of vanilla and butter. Without the solidity that the chocolate chips add, I can relate to Joe Rogan’s “Where’s the cookie, bro?” comment a bit more, but I still don’t have a problem with the way these cookies melt in my mouth.

Although I am used to keto treats and may not be the best person to comment on this, I felt that the Cinnamon Snickerdoodle was tasty on the level of a traditional cookie made with sugar. I may like these better than the Double Chocolate, but that could be because they’re new to me at this point. After eating the second cookie, I definitely crave a third, though I haven’t given in yet.

You can also read my Fat Snax review to compare another keto cookie, though I’ve only tried one flavor of Fat Snax (chocolate chip).

Can You Buy Nui on Amazon? Where to Buy Nui Cookies

Looking for a Nui promo code? Just visit the Nui website and click around until you see a popup offering you a 10% discount. This helps to cover the cost of shipping.

I’m excited to eventually try the other two flavors, and I definitely recommend trying Nui cookies for yourself. They’re quite tasty, and while a lot of keto food is perishable, it’s easy to take keto cookies with you on the go. Plus, it makes the diet more enjoyable if you miss sweets. Of course, there is also something to be said for avoiding sugar alcohols and just focusing on eating whole foods, but for many people, having keto treats makes it easier to stick to the diet.

Have you tried Nui keto cookies? Do you think they’re like a mirage? Which flavor should I order next? Feel free to leave a comment below!